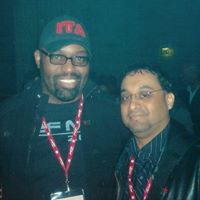 Pic: Frankie Knuckles "The Godfather of House" and DJ MIDIMACK in 2003 in Cannes, France.

DJ MIDIMACK is a DJ/Producer from Oakland California (in the San Francisco Bay Area) and a 30+ year veteran (O.G.?) of the turntables and international club scene. He continues to travel around the world but has the podcast to share his music with those that may not hear him play live. He is passionate in his love of good dance music and in any given set he will play music from the past, the present, and the future...but no matter what he plays, you can be sure it will be FUNKY!

I began my musical journey as a little boy in Oakland, CA where I "collected" my favorite records along with my older teenage sisters (FYI: I later inherited most of my sisters records when they moved out - but don't tell my sisters!). There was a lot of music being played in the house in those days; Mom was playing a variety of Spanish music in the kitchen, Dad had his radio going in his workshop, and both sisters had their own radio and listened to different radio stations - the House was "Rockin'"! Music shows like Soul Train and American Bandstand were never missed and weekly radio music "countdown" shows were listened to and logged (yes, logged!).

It was when I was teenager that I started to open my eyes to the many different musical artists and musical genres available in my local record stores. Bay Area radio stations began playing music from new unconventional artists like The Eurythmics, Sting (The Police), George Michael (Wham!), Madonna and Prince (and many many more). Hip Hop artists like Afrika Bambaataa, Run DMC, The Beastie Boys, LL Cool J, MC Hammer, and Egyptian Lover were a big influence - at this time Hip Hop was not limited by style or tempo. Hi-Energy/Freestyle was the music of choice for local Latino teenagers, Punk Rock was blossoming in neighboring Berkeley, and "Modern Rock" was a must for many nearby college students. A LOT of new music was in the air!

It was in a popular 18 & over San Francisco dance club (which I got in at 15 thanks to my older sister) called Studio West that I heard one of the Bay Area's most influential club DJ's of all time - Cameron Paul (R.I.P). I got to watch him "spin" live from a nearby balcony and I got bit by the DJing bug. At that time Cameron Paul played music that was not available ANYWHERE else except in Dance clubs (sound familiar?), but he would soon become a staple on the radio as he introduced and popularized the mixshow format (a non-stop music mix show). It was in these years that I honed my skills on the turntables and became a popular mobile DJ. I played gigs throughout the Bay Area for Colleges (UC Berkeley, City College of San Francisco, UC Santa Cruz, UC Davis, Laney College, & others), School dances, Weddings, Birthdays, and Quinceañeras.

The 90's brought several multi-year residencies in San Francisco dance clubs (the longest being a 5-year residency in a bar in the heart of the world-famous Castro district), many radio guest appearances (KMEL in San Francisco, WCRX 88.1 FM in Chicago), and several permanent radio mixshow positions - KYLD in San Francisco and KMVR in Las Cruces, NM - where I would mail tapes (yes, tapes!) to New Mexico from California every week for a couple of years. Most importantly, the 90's brought the love for House Music. Soulful House Music. As Hip Hop started to take over radio, it was House Music and Raves that started taking over the underground dance scene. So many genres and sub-genres would come out of House Music (Trance, Garage, Hard House, Drum & Bass, today's Trap Music, etc.) but it all stemmed from this unique music born in Chicago (see Frankie Knuckles in Wikipedia - you're welcome!). But it was House Music that sparked my interest/passion that continues to this day.

In 1997 I moved to Chicago, the birthplace of House Music, to expand my musical knowledge. I made many friends in Chicago that I have to this day (shout out to Jackin' Jamie Larsen!). It was on a previous visit to Chicago that I heard several House tracks being played during a morning radio show - not just domestic tracks either, they played imports as well!. I needed to move to Chicago. House Music was everywhere. One of my first jobs in my new home was at the Hip House Record Store. It wasn't the biggest or the most popular record store around but the quality of the music available was inspiring. That lead to a position at the now infamous UC Music record label (AKA Underground Construction) - one of the biggest independent House labels in the United States at that time with 6-7 releases a month - where I would promote records to DJ's around the country.

THANK YOU FOR LISTENING TO THE PODCAST!